But what really is a “Lavette” and why is it called this??

A “Lavette” is essentially a Half-Bathroom or Powder Room.

“Lavette” is a derived word that basically means ‘small lavatory’.

If one was to do a bit of research on the internet about the term, they would find that it is said that the expression was popular in the 1930s and was often used to describe these smaller bathroom areas, often found under a stairway or in place of a large clothes closet. 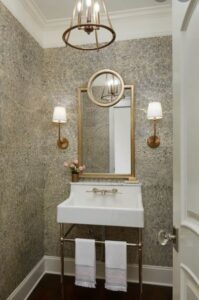 Interesting to me, articles I have found have said that the term itself did not endure over the course of time.

I certainly would like to beg to differ on this one.

The term “Lavette” I have actually found to be quite commonplace.

For years I have consistently heard various Clients use this term to describe these handy restroom areas that obviously vary in amount of use from household to household.

Some families constantly are using their Lavettes, other families have Lavettes that hardly get any use.

Regardless of how much or how little a Lavette is used, it definitely is a handy room to have in one’s home, particularly if someone has a larger family or enjoys entertaining.

Lately we have worked with a number of Clients to modernize their Lavettes.

It is amazing how much of a difference it can make when upgrading these areas, similar to any room that one might delve into bringing up to a more contemporary feel.

Upgrading could mean simply changing out the vanity or upgrading the paint.

Anything to provide a little bit of a different feel.

For the more adventurous homeowner, there is also the idea of adding a Lavette into a space where one previously did not exist.

Clearly this is a MUCH more involved undertaking.

Where tiny upgrades to a Lavette would typically require minimal carpentry, electric, and/or plumbing work, adding a whole new Lavette requires a good amount of a number of trades to make the plan become a reality.

“Lavette” is a fun word to use in conversation with your friends when discussing features of a home.

When I used to hear the word used, I almost used to think whoever was using it was trying to prove that they knew what the word meant and on the same token, when I heard the word, I always used to pretend I knew what it meant and kept going with the conversation.

If you were previously similar to me in this capacity,

now you no longer need to pretend!

Follow Us on Social Media!
PrevWhat is Hardware Cloth?
What is the Best Waterproofing for Wood??Next

Asbestos is a natural mineral made up of delicate and flexible fibers that are impervious to heat, electricity, and corrosion. These qualities are what have made asbestos a “go-to” building material prior to society eventually figuring out how harmful it actually was. If your

How Do You Replace a Bulkhead (aka Cellar) Door?

Is it OK to Powerwash a Roof?

What Makes a Home Considered “Historic”?

How to Get Pet Urine Smell Out of Hardwood Floors…

What is a Drip Cap?

What is the Best Waterproofing for Wood??

What is Hardware Cloth?

What is the Single Thing You Can Do to Help Sell Your Home – FAST!!!???

What is Roof Decking Code?

What Causes Wood to Rot?

Why Does Siding Get Chalky?

How Do You Get Rid of Carpenter Bees?

How to Caulk Large Gaps

What is a Calcimine Ceiling?

Why Do Deck Stains Peel?

Where Do Bathroom Vents Go?

How Many Years Do Wood Fences Last?

What is the Difference Between a Carpenter Ant and a Termite??

?‍♂️ What is Efflorescence? ?‍♂️

?Ever Wondered About the Plastering Process???

Why Are GFI Devices Used?

When Should You Replace Your Front Door??

What are the Benefits of Epoxy Flooring??

Addiction During the Holidays & Beyond…

Selling Your Home? To Repair or Not To Repair??

Do You Enjoy Shoveling Snow?

Why You are Getting Water in Your Basement…

What is the Best Month to Perform an Exterior Paint Job in RI?

Why Does the Paint on My House Bubble?

When is Rotted Wood NOT Really Rotted???

If You Have a Chimney on Your Home, THIS is NOT Optional!!

When is the Best Time of Year to Clean Out Your Gutters??

Do You Need Surgery?

How to Save the Destruction of Your Home for $2.87…

Are Doorbells Falling by Way of the Shutter??

What is Home Improvement Serendipity??

Are You Unintentionally Making it Difficult for Your Home to Breath?

Does Your Gutter System Have Seams?

Does Your Property Have Proper Drainage??

How to know which Colors to Pick for your Home?

What is Behind That Drop Ceiling???

Have you Ever Smooshed a Plant?

How Valuable is that Old Ladder??

What in the WORLD is the Purpose of Shutters???

The Evils of Using Tape on Home Improvement Projects!

Tips for Cleaning Your Walls

What is Lurking Behind YOUR Walls???

Why “Natural Finish” Deck Staining is SUCH a Finicky Undertaking…

Termites, Carpenter Ants, and other Wood-Boring Insects…Oh My!!

Getting Your Home Ready for Spring

Does Your Home Have Hidden Mold?

How to Stop a Bleeding Knothole…

The Importance of Storm Windows!

Spring is Springing!! Now What Do I Do???

How to Get Your Contractor to Treat You Like GOLD!!

The BIGGEST Painting Mistake I ever made…????

The Next Big Thing in Home Improvement…

How Can I Best Find a Wall Stud??

What does it Mean to Re-Point a Chimney??

What Home Renovations Increase the Most Value When Selling???

Why Winter is the Best Time to Sell Your Home…????

A Simple, Sure to be Often Overlooked, Home Maintenance Initiative…

Addiction During the Holidays…

A Top 10 of Reasons Why Smoke Detectors Commonly Go Off…..

How Cold is TOO Cold to Paint Outside???

Sprucing Things Up for the Holidays!!

What on EARTH is going on with this Weather???

What is a GutterBrush???

If a piece of wood furniture has a natural wood finish, can I just paint right over it?

How do you Clean Painted Walls??

What is the BEST Way To Remove OLD Wallpaper???

When is a Cricket not a “Cricket”??

What the HECK is a “Stink Pipe”?

Where in the WORLD are these Water Stains coming from ?!?!?

This Week… The Challenges with Skylights!!!

Painting Glossy Interior Trim…and Getting the Paint to Stick!!

The Benefit of a Properly Flashed Chimney

What does “Cleaning out my Gutters” REALLY look like???

Can you Paint Ceramic Tile or Glass?

Possibly the MOST Advanced Flat Roof System YET!!!

Why does the Paint on Brand New Wood PEEL So Quickly??

Read the controversial article that recently got me banned from writing in a magazine… ..

Buying a Home? What to Look For!!

How Do You Replace a Bulkhead (aka Cellar) Door?

Is it OK to Powerwash a Roof?

What Makes a Home Considered “Historic”?

How to Get Pet Urine Smell Out of Hardwood Floors…

Do you have a Property or Home Improvement Project coming up that you would like to discuss with us?

We would love to hear from you!